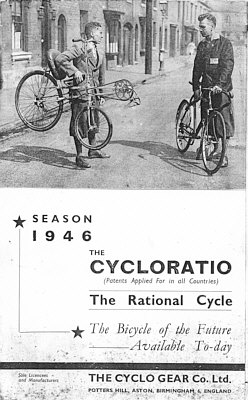 What follows is an online reproduction of the original 1945 brochure that I happened upon at the Canberra Bicycle Museum <canberrabicyclemuseum.com.au>. It is a very interesting read... 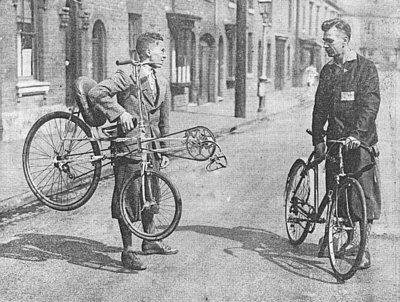 THE
CYCLORATIO
(Patents Applied For in all Countries)

The Bicycle of the Future
-- Available To-day 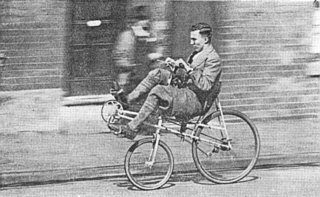 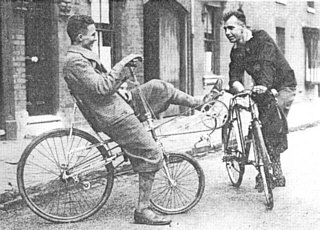 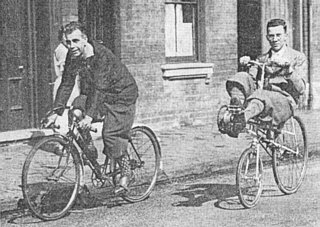 The CYCLORATIO is the complete answer to those cycling "authorities" who declared that Cycle design had reached stagnation point.

Of the actual machine little can be said that is not shown in the accompanying photographs, and it must be instantly apparent to the most inexperienced eye that this machine is definitely faster than the orthodox bicycle.

Its design minimizes wind resistance, and brings both back and leg muscles into play whilst riding.

The back support supplements the power of the leg at each pedal thrust, and, of course, the ultra short wheelbase allows for quicker turning.

The final details of this revolutionary cycle have not yet been decided, but interested cyclists can rest assured that The CYCLORATIO has come to stay, it represents the newest development of our wonderful pastime -- cycling.

"JUST AS THE CYCLO GEAR CHANGED THE COURSE OF CYCLING HISTORY, SO WILL CYCLORATIO"

YOU SHOULD READ THIS

This brief report of a Cycloratio in the "Concours Des Alpes" Sept. 1935 is perfectly true and is taken from a French Journalist's account of that event when he was mounted on a Cycloratio.

The "Concours Des Alpes," 405 miles of mountain roads, the stiffest touring trail in France and possibly the stiffest in Europe. There are four stages in the event, and it is almost unnecessary to add that every machine must be a pukka thoroughbred,and of course, every machine is equipped with a Derailleur gear ("CYCLO" was featued on 22 of the 33 starters and gained the first nine places).

The trail did not give realization to the anticipation of the excitement, as owing to the light equipment of the Cycloratio, the rider was so heavily penalized that any subsequent god performance was hopeless. On certain gradients the journalist found that he could ride up in bottom gear, even when very much superior riders tan himself were compelled to walk, and realized that the so-called terrors of the trail were non-existent when mounted on the Cycloratio.

The average speed worked out at over 9 miles per hour on Mountain roads, covering 14 summits including the Mont Blanc raising to a vertical height 38 times the height of the Eiffel Tower.

It is to be noted that the rider in question participated last year in theis trail with a normal 8 Speed equipped machine. The trail proved to him on that occasion so hard that he decided not to participate this year under the same conditions. Contrary to last year's experience he finished this year's trail without any abnormal fatigue, although the trail was harder than the previous year. Our journalist friend puts the question, 'Am I wrong in stating that this result is due to the "Cycloratio Wonder"'.