Before you start debur and wire brush all the metal pieces.

The fender (Item 2) is made out of a piece of 60mm OD extra light pipe. I got the idea for this after looking at Jukka 2 on the Python project page <python-lowracer.de/projects.html>. I figure that if you have to brake suddenly, better to have a fender that can support your weight pressing on it, than one that bends and rubs against the tire -- which could get very hot rather quickly! 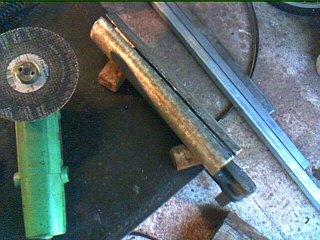 Start by clamping the pipe to your work table. For this I have two wooden chocks. They have a semicircular groove cut out of them. I constructed the chocks by using a 40mm hole saw to cut a hole in a small block of timber, then I cut that in half to produce the two chocks. They are also great for holding pipe in the vice.

Once the pipe is clamped, I draw a chalk line down the center. The with a cut-off saw on the angle grinder, carefully slice the pipe in half down one side. Then turn it over, re-clamp, mark the other side with chalk and finish cutting it in half. 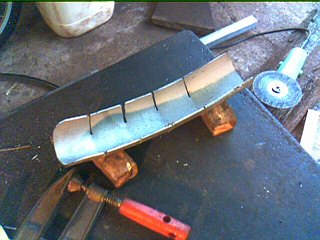 Now that you have the pipe cut in half, take one half and clamp it to you work table with the open side facing up. Now mark down each side at 50mm intervals. Run the square down the intervals and make sure that they are actually opposite each other. Now take the cut-off saw and make a slice down the side from each mark. Make sure to center the saw on the marks and cut as squarely and vertically as you can. At the end of each cut, grind off a little extra (2mm) from each side to make room for the bend. Remember to hold the cut-off saw firmly, but apply light pressure to the cut.

Once cut, debur the incisions. If you cut down with the cut-off saw cutting outwards, then all the burs will be on the outside and they will be easy to grind off. Now with one end still clamped, grab the other end with your vice grips and bend it up. It should all concertina together and make a nice bend. 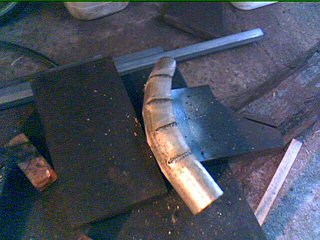 Now I placed those big blocks of 1.5" plate on the fender to hold it down while I welded each of the notches. You should end up with nice, penetrating welds because of the gap. Use an obtuse angle as you weld to pool the weld metal and prevent burn through. You also have to ark you hand around because the weld angle is constantly changing. Best to practice the arm movement with the power off to get a feel for the motion before you start to weld. Once you are done you can grind the weld beads smooth.