Why Does Tilting Matter? 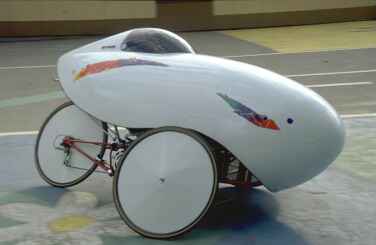 For non tilting trikes the rider Center of Gravity (CoG) must be low, and the track (the distance between the contact patches of the two outer wheels) must be wide, certainly much wider than the profile of a standard bicycle and rider. The reason for this is dynamic stability. For a non-tilting trike to be safe, it needs to handle corners at normal speeds without the risk of rolling over. If however you wish to construct a trike with a narrow track and/or high seat, then the only way for it to be dynamiclly stable is to make it tilt.

What causes a non-tilting trike to roll? Well, it turns out that there is an optimal (safe) place where the rider CoG on a trike should be.

Looking down from above, if we draw a triangle between the three contact patches and at the mid point of each line we draw another line to the opposite corner, then the intersection of these three lines is the optimal point where the rider CoG should be.

Now looking from the front, if we take the track measurement B and we divide it in half we get A. We use A to construct an isosceles triangle between the contact patches. This triangle represents the tipping point for the trike. If the CoG is inside the triangle, then the trike will skid when it looses traction while cornering, if the CoG is above it, the trike will tip.

You can also draw a similar triangle on a side view of the trike using the wheelbase measurement for B to derive A. You can then use this side-on triangle to calculate where to place the CoG in order to prevent the trike from tipping forward when breaking -- more of a problem for tadpole configurations.

The previous two calculations would be fine if the CoG on either axis was directly between the two wheels, but its not. The optimum place is 1/3 of the wheelbase length back from the isosceles triangle's base. At this location, the triangle is only 2/3 of the track width.

Now we use this 2/3 track measurement as B to derive A which is 1/3 of the track width. We then use A draw a vertical line up from the optimal CoG point. We then use the point at the top of this line to create a three sided pyramid. This pyramid represents a 3D view of the tipping space, inside which the rider CoG must remain for the trike to be stable.

This simulation confirms the theory (download the Juice file here). As you can see, on a non-tilting trike you end up needing an very low seat or a very wide track to keep the rider CoG inside the tipping space. Find out about running Juice simulations here.

Spend any time playing around with this simulation and it soon becomes clear that raising the CoG by as little as 100mm has a big impact on handling. Raise it by 200mm to 500mm -- the CoG height you would end up with if he seat height is 250mm and a trike with a relatively narrow track of 700mm becomes seriously dangerous! 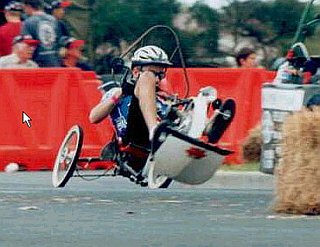 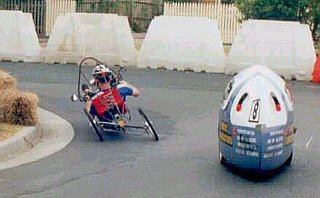 If you want a trike with a higher seat and/or a narrow track, then you have a problem, you simply can't take corners at full clip without tipping. However if the trike tilts you can have a higher seat, because even though the rider CoG may be above the pyramid, as long as the CoG leans to the inside of the outer pyramid plane as it corners, the trike will be stable while cornering. Paul Sims parallelogram based leaner (pictured above) was able to out corner other non-tilting trikes competing in a 24 hour OzHpv event.

This leads to another factor to consider in all this, the banking angle. It turns out that objects under the force of gravity have a constant banking angle at speed regardless of the objects weight. The formula above is used to calculate this angle. v is the velocity (speed divided by time), r is the corner radius and g is gravity (9.8 m/s2).

Using the formula, this first graph plots this banking angle as a product of speed. The lines in this case represent the corner radius in meters.

Using the formula, this second graph plots banking angle as a product of corner radius. The lines in this case represent the speed in kph. You can download the Excel spreadsheet here.

On any trike, if you construct the frontal triangle described above using the actual rider CoG (assuming it is above the tipping point) and measure the angle from the outside contact patch to the rider CoG, you can look up this angle in these tables and derive the maximum speed on a particular corner radius the trike can handle without tipping over. Depending on the grip and surface, a tire will generally loose traction at around 45° (1g), so angles beyond this are meaningless.

This of course assumes that the road you are riding on is actually flat. In my area many of the arterial roads are properly engineered, so all these calculations have been used to grade these roads. You can turn a corner on a properly banked road at the posted speed without needing to tilt at all. But they are a double edged sword. When you ride fast down hill a banked corner is helpful, but when you ride slowly up hill, a banked corner is a nuisance. Its one of the many reasons why tilting should always be independent of steering.